Watt about the bell curve?

I should start this post by saying how hard I am finding it to maintain my tagline of trying to keep the discussion civil. I think it’s virtually impossible and I now completely understand why some don’t bother. I should probably change it to trying to be civil, but even that may not last long.

The newest WUWT post is a guest essay by Bob Fernley-Jones called clanging of the bells on extreme weather change. In this post he criticises the use of bell curves to represent extreme weather. He includes the following figure which is intended to show how the distribution will shift to higher temperatures as global temperatures increase, thus increasing the number of extreme events.

An illustration showing how warming can shift temperatures to higher values and increase the number of extreme events (credit : someone, but probably not WUWT)

Bob Fernley-Jones seems to be critical because global temperatures have only risen by 0.8oC, a negligible amount he seems to be suggesting. He suggests that using absolute temperatures would be a better representation. This is shown in the figure below. Here’s the point though, Bob, the distributions you’re criticising are not distributions of the entire globe’s absolute temperature, they’re distributions of the temperature anomalies. This means that it is a distribution of the variability of the temperature about some local mean. The planet has numerous thermometers located all over the globe. One can choose some long time interval (normally 30 years) over which to define a mean value for each location and for each shorter time interval (day/month). The temperature anomaly is then the difference between the measured average temperature for the same short time interval (day/month) and the calculated mean (I think I’ve explained this properly, but if not feel free to correct me). One can then plot distributions of anomalies because this allows one to visualise how temperatures vary with respect to the mean values. It also allows one to include all the locations on the globe because one is considering the variations from a mean and not absolute temperatures (i.e., if we used absolutes, the mean value at one location may be an extreme value at another location, or at the same location but at a different time of the year.).

As an illustration, here’s a figure from a paper called No increase in global temperature variability despite changing regional patterns (and, no, the title doesn’t mean what some think it means). This figure shows how the distribution of the global temperature anomalies has shifted to higher temperatures since 1958, although the variability has remained largely unchanged. There’s a clear global warming signal and its clear that there have been more extreme high temperatures (defined as some number of standard deviations from the mean of the first time interval) recently than there were decades ago. 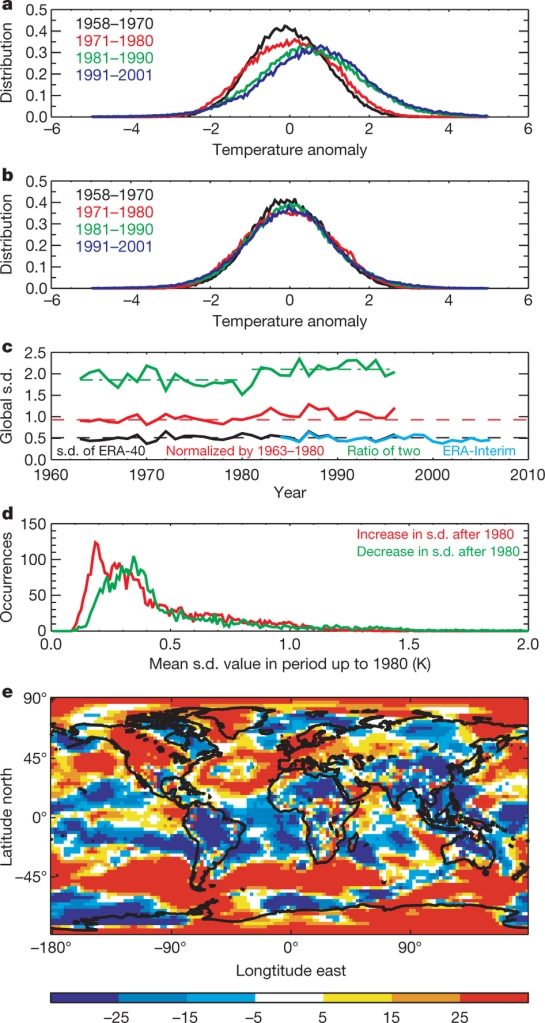 A figure showing how the distribution of temperature anomalies has shifted to higher temperatures since 1958 (despite the variability remaining constant) (credit : Huntingford et al., Nature, 500, 327, 2013)

So, Bob Fernley-Jones, your suggested alternative isn’t really more representative. Why? Because we know that the globe can have some very high temperatures and some very low temperatures. Your representation would only really illustrate changes at the hottest and coldest locations on the planet. What we’re actually interested in is how temperatures are changing all over the globe and hence we use temperature anomalies and not absolute temperatures. That way we can actually tell how temperatures are changing with time. Your suggestion would tell us virtually nothing. I really am trying to be civil, but it’s posts like this one by Bob Fernley-Jones that makes me wish Anthony would let someone submit a guest essay about the Dunning-Kruger effect. Hmmm, there seems to be a sufficient lack of self-awareness over at WUWT that it’s quite possible that someone could submit such a guest post and noone there would realise that it was referring to them. Now there’s an idea.

3 Responses to Watt about the bell curve?