There is a new Nature Climate Change commentary called Overestimating global warming over the past 20 years. It’s by John Fyfe, Nathan Gillet, and Francis Zwiers. I’ve been trying to find out what the criteria are for a commentary in Nature Climate Change, but can’t seem to find much about this. I don’t know if the paper is peer-reviewed or not and if it was solicited or not.

Anyway, I find it a slightly strange paper for a number of reasons. It is a comparison between surface temperature trends from CMIP5 models and HadCRUT4 data. It considers the period 1993-2012 and the period 1998-2012. The basic conclusion is that the observed warming trend is significantly different to that expected based on CMIP5 models. Indeed, that is – as far as I’m aware – quite well know. 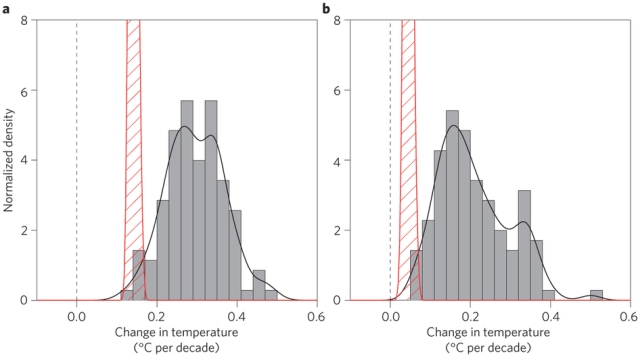 The are a number of immediate issues I have with the paper. One is that it’s not obvious why comparing trends (rather than simply comparing temperature anomalies) is that appropriate. This seems a little like cherry-picking start years. It can make the mismatch seem much worse than it maybe is. Another is that I can’t see where the errors are coming from. The paper suggests that for the period 1998-2012, the observed trend is 0.05 +- 0.08oC per decade. The Skeptical Science Trend Calculator gives 0.052 +- 0.155oC per decade. Both of these are meant to be 95% confidence intervals, so why is the value in this paper half that from the Skeptical Science Trend Calculator? It could be that they’ve used un-correlated errors, but that would be wrong as far as I’m aware. For the CMIP5 models, the paper claims that the trend for 1998-2012 is 0.021+-0.03oC per decade. Again, I don’t see how these can be 2σ uncertainties. Certainly the distribution of model trends seems to have a standard deviation that is bigger than 0.015oC per decade.

So, I don’t dispute the basic result, I’m just surprised by the confidence intervals and am, hence, not convinced that they have actually compared the appropriate distributions. Admittedly, I am no expert at this so maybe I just don’t understand this well enough to really know if they have made some kind of silly mistake or not. I do, however, have a bigger issue with the paper. The title refers to global warming. The paper itself says

The inconsistency between observed and simulated global warming is even more striking for temperature trends computed over the past fifteen years (1998–2012).

Given that it now seems widely accepted that the ocean heat content is a much better indicator of overall global warming, I find it surprising that something published in Nature Climate Change is still referring to surface warming as global warming. It would seem that climate scientist would want to distinguish between overall global warming and surface warming so as to avoid their work being mis-interpreted. Even if the authors weren’t bothered I would expect either the referees or the editor would like to avoid such confusion. Again, I’m not a climate scientists so I can’t really say why there are still papers that use “global warming” when referring to “surface warming”. Maybe there is a perfectly valid reason. I also appreciate that climate scientists have a sufficiently hard time without me also criticising what they’re doing. I just find it surprising that this is still happening despite the ongoing debate about the significance (or lack thereof) of the “hiatus” in surface warming.