Andrew Montford and the BBC News

Andrew Montford, who writes the Bishop Hill blog is a noted climate science “skeptic”. In the run-up to the release of the IPCC’s AR5 SPM, the BBC had a number of news reports about climate science. One of the reports included a segment with Andrew Montford in which, if I remember correctly, he made some comments about uncertainty in the models. Andrew Montford is clearly quite heavily involved in the climate change debate (having written a couple of books, running a popular blog, and written some reports for the Global Warming Policy Foundation) but he isn’t, by any stretch of the imagination, a climate scientist. So, I was surprised that the BBC chose to include him in a report that seemed to be specifically about climate science, rather than – for example – about policy.

Andrew Montford actually has a degree in Chemistry, so maybe he does understand climate science. Can I find any evidence of that? Well, I went through some of his recent blog posts and I must say that it does appear that he doesn’t. As an example, in a recent post he promotes a letter – written by someone called Doug Keenan – to Julia Slingo, the UK Met Office’s chief scientist. The letter relates to a claim in the recently release IPCC SPM which says

Doug Keenan’s letter is claiming that the statistical model is insupportable and that the confidence intervals should be much wider—perhaps even wide enough to include 0°C. Really, that’s amazing. Could it be true? Let’s actually look at some data. The figure below shows the GISSTemp temperature anomaly data for the period 1880 – 2013. The data points are monthly values, the curve is a 12 month running mean, and the straight line is a linear fit. Without having to do any kind of statistical analysis it’s fairly clear that temperatures today are about 0.8oC higher than they were 130 years ago and that there is likely an uncertainty of about 0.1 to 0.2oC. So, Doug, there really is no chance (or at least the chance is vanishingly small) that the data is consistent with there having been no increase in surface temperatures since 1880. 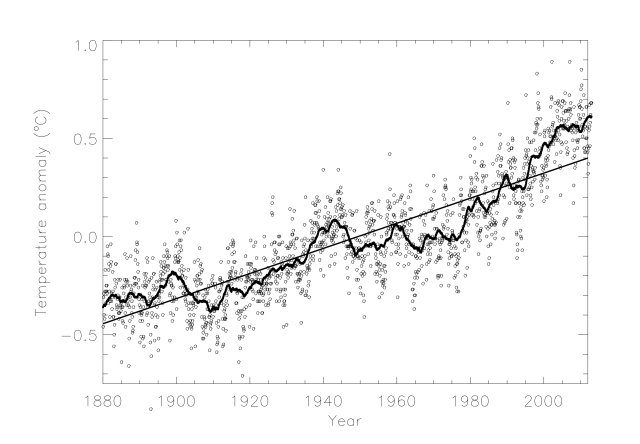 Temperature anomaly together with a 12 month running mean and a linear trend.

Furthermore, these comparisons do not provide evidence against the existence of a trend in the data.

These results have no bearing on our understanding of the climate system or of its response to human influences such as greenhouse gas emissions and so the Met Office does not base its assessment of climate change over the instrumental record on the use of these statistical models.

Nor do the results provide any reason to disregard observational evidence of global warming. In an analysis such as that undertaken here, if the tested models are poorly specified then even the most likely of the tested set of models will be a poor representation of the behaviour of the real climate. In such cases the relative likelihood of the models considered here is of little scientific value.

My summary of the report is as follows. To analyse a data set – such as the global surface temperature anomalies – requires some kind of statistical model. The models considered in the report were Linear model with first order autoregressive noise, Third order autoregressive integrated model with drift (ARIMA(3,1,0)), and First order autoregressive integrated moving average model with drift (ARIMA(1,1,1)). Some of these models appear to do a better job than others. If, however, you’re trying to do a linear fit to the data, then such a model will clearly not be good fit to the wiggles (variations in the data), but it does allow you to estimate how much the data values have varied, linearly, with time and to determine any uncertainty in this estimate (i.e., what is the likely linear trend and what are the errors in this trend?). Furthermore, such an analysis doesn’t tell you why the data has behaved in the way that it has. For that, you need to consider physically motivated models/theories that can be used to try and understand the behaviour of the data.

So, the statistical models can allow us to estimate how, for example, surface temperatures have changed since 1880 and to estimate any uncertainties in this change. Hence we get that there is a 90% chance that surface temperatures have increased by between 0.65 and 1.06oC in the last 130 years. This, however, doesn’t tell us why surface temperatures have changed. To understand why, requires physically motivated models and theories. In my opinion, Doug Keenan’s letter to Julia Slingo illustrates that he doesn’t understand basic data analysis and hasn’t understood the Met Office’s report to which he refers. That Andrew Montford has promoted this letter on his blog also suggests, to me at least, that he too doesn’t really understand these things either. Maybe promoting something on his blog doesn’t mean that he endorses it, but – if so – he hasn’t put much effort into making this clear. Given this, I don’t understand why the BBC thought Andrew Montford was someone they should interview when discussing climate change and climate models.

55 Responses to Andrew Montford and the BBC News