Matt Ridley has an article in The Times called Green energy could kill Britain’s economy. I will say that I find it quite remarkable that someone who would probably call me an alarmist (for simply accepting the underlying science associated with AGW) can then use such a title without any sense of irony. The article is pay-walled so you can read it here.

I won’t say much about this article, but the basic premise seems to be that oil and gas prices will continue to drop and hence if more and more of our energy comes from renewables we will have an uncompetitive energy market. I’m clearly no expert at this so, as usual, happy to be corrected by those who know better. My understanding is that at the moment, the most expensive renewable technology is offshore wind at around $220 per MWh. The cheapest fossil fuel source is natural gas at around $80 MWh. Many, however, argue that we should be introducing a carbon tax to properly reflect the cost of emitting carbon. Reasonable estimates of a carbon tax would take the natural gas cost up to around $120 per MWh. So, if nothing else changes, natural gas is considerably cheaper than the most expensive renewable technology, but actually quite similar to some (PV, onshore wind).

I did a bit of searching to find out something about projected costs of natural gas. What I found is from the US Energy Information Administration and the relevant page is here. It produces projections for 4 different shale gas scenarios. The figure is below. I realise that this is for the US and that it is simply projections, but it does seem that there is no scenario in which natural gas prices won’t rise. 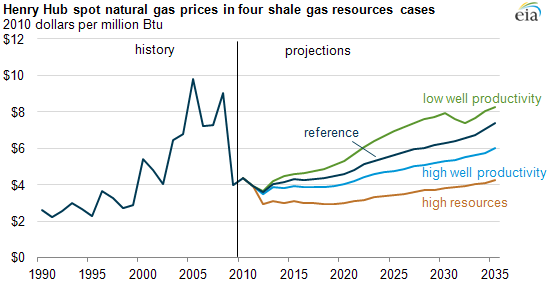 So, it seems to me that the cheapest fossil fuel energy source (natural gas) is – today – about a factor of 2 cheaper than the most expensive renewable energy source (offshore wind). There seems to be a general view that natural gas prices will rise over the coming decades. It seems unlikely that the cost of renewables won’t fall. Given that, it’s hard to see how switching to renewables will destroy our economy simply because of a price differential (because there won’t be much of a difference).

Having said that, I’m not suggesting that switching to renewables is trivial. Clearly there are many issues that would need to be resolved and there are some renewable sources that won’t be suited to UK conditions. All I’m really suggesting is that the argument that renewables will destroy our economy by being much more expensive than fossil fuels seems to be based on some assumptions that are unlikely to be correct (fossil fuels remain cheap, renewables stay expensive). Matt Ridley finishes his article with

Suppose, instead, world energy prices come down, even as the cost of subsidising renewables and nuclear starts to bite. We will have rising energy bills while the rest of the world has falling ones. That is a recipe for job destruction.

Suppose, instead, world fossil fuel energy prices don’t drop? Maybe then we’ll be thankful we’ve had the foresight to consider alternatives, especially if we’ve invested in our own labour force rather than simply importing from elsewhere. That might seem like a good way to create jobs.