William Connolley had a recent post about making stuff up, that discussed the linear relationship between temperature change and change in forcing (ΔT = λΔF). I commented that I had thought that this linear relationship was simply an approximation based on the blackbody flux equation

William Connolley correctly pointed out that this typically ignores feedbacks, so probably isn’t quite correct. However, I think that there are still some interesting things one can infer from this. For example, the coefficient 4εσT3 gives the climate sensitivity in the absence of feedbacks. If we use T=288 K, then 4εσT3 = 3.25Wm-2K-1. In the absence of feedbacks, a doubling of CO2 results in a change in adjusted forcing of 3.7Wm-2 which, using the value just calculated, would result in a rise in surface temperature of 3.7/3.25 = 1.1 K.

So, why am I writing this? Well, I noticed that Judith Curry had a recent guest post (by Steve McGee) called Seasonal radiative response. In this post, Steve McGee considers the seasonal variation in average global surface temperature and the associated variation in outgoing long-wavelength flux, to then produce the figure below.

What Steve McGee then seems to do is to use this to estimate the climate sensitivity. What I think Steve McGee does is to use that a doubling of CO2 produces a change in forcing of 3.7Wm-2, to then determine the corresponding change in temperature. What his analysis suggests is that the error range indicated ( 1.6oC to 4.6oC ) is that of all the monthly data considered. The range of annual observed seasonal correlations is from 2.0oC to 2.7oC. The most frequent correlated response for the CFSR years was 2.5oC.

One might think that this all sounds quite reasonable as it is quite similar to other estimates of the climate sensitivity. I was, however, initially a little surprised (given what I did at the beginning of this post) that it wasn’t something closer to 1oC per 3.7Wm-2, rather than in excess of 2oC per 3.7Wm-2. If the emissivity isn’t changing much, then surely what I did at the beginning of this post would be a reasonable representation of how the outgoing flux should vary with variations in temperature. The reason for the difference is, I think, quite straightforward and is explained quite nicely in this Science of Doom post (H/T Pekka Pirila). It’s also essentially explained in Steve McGee’s post, but he doesn’t appear to realise it.

I don’t think that Steve McGee has really found a way to estimate climate sensitivity. What he’s actually illustrating – I believe – is the feedback due to water vapour. If you consider the figure below (from Science of Doom, taken from Ramanathan and Inamdar), during the course of a year not only does the average surface temperature vary, but so does the radiative forcing due to water vapour. The atmospheric water vapour concentration depends on temperature and increases with increasing temperature. The reason Steve McGee got more than 2oC per 3.7Wm-2 (rather than around 1oC per 3.7Wm-2) is because the emissivity (ε) is essentially increasing with temperature (i.e., the outgoing long-wavelength flux increases more slowly with temperature than it would if the emissivity remained constant). 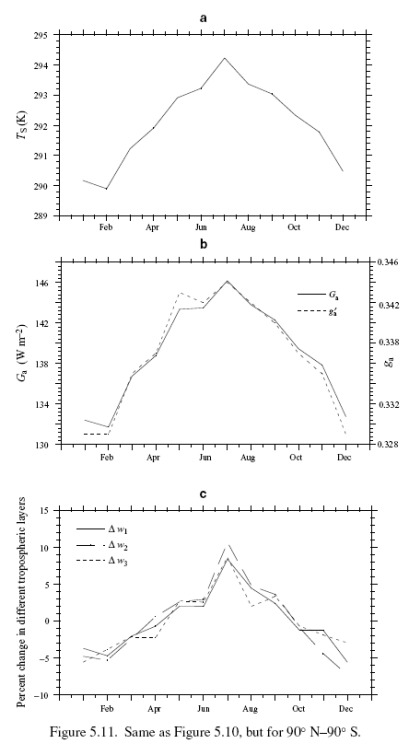 So, maybe I’m wrong and Steve McGee is correct that one can use seasonal variations to estimate the climate sensitivity, but I think all he’s really done is confused the seasonal variation in water vapour forcing (which is more representative of a feedback than a forcing) with the climate sensitivity. Given the Science of Doom post, it would seem that this is something that is already quite well understood and so I find it a little surprising that Judith would post this without comment. There may, however, be subtleties that I don’t quite get, so more than happy to have them clarified in the comments.

112 Responses to Forcings and feedbacks