We’ve all forgotten about the oceans!

I recently wrote a blog post about Roger Pielke Sr’s guest post on Climate etc. in which he was suggesting an alternative metric to assess global warming. Roger was essentially suggesting that we should be using the ocean heat content (OHC) as a metric for global warming. I largely agree, although I don’t think it should be the only metric. I also – after writing the post – discovered that Roger had made a mistake that somewhat weakened the conclusions that he drew from his analysis.

As part of his post, Roger included this quote – attributed to James Lovelock.

The thing we’ve all forgotten is the heat storage of the ocean – it’s a thousand times greater than the atmosphere and the surface. – James Lovelock

What is being suggested – I think – is that even though we have an energy imbalance (we’re receiving more energy than we’re losing) the extremely large heat content of the oceans (500 – 1000 times greater than the surface/atmosphere) means that most of this can simply go into the oceans without causing a significant rise in surface temperatures. Often, though, when someone thinks that everyone else has forgotten something, it’s more likely that everyone else hasn’t, but they’ve considered it and realised something that the first person hasn’t considered.

Here’s what I think those who argue that the oceans can absorb all the excess energy haven’t considered. Our emissions are largely determining the energy imbalance. The imbalance is removed through a rise in surface temperatures. The slower the surface temperatures rise, the larger the imbalance will become and the more energy will be accrued by the system. Therefore, even if the oceans could absorb a massive fraction of the excess energy [edited to change “Energy Imbalance” to “excess energy” – prompted by Eric Steig’s comment], it may not “help” as much as some might think. Also, we know – from observations – that although the heat capacity of the oceans is 500-1000 times greater than that of the surface/atmosphere, it’s currently not accruing 500-1000 times more energy than the surface/atmosphere. The oceans are absorbing just over 90% of the excess energy, with the surface/atmosphere absorbing a few percent (2% – 4%). It’s more like 50 times more, than 500 times more.

The figure below shows how the surface temperature changes with time, the solid-line being the 2%-98% test, and the dashed-line being the 0.2%-99.8% test. In the 2% test, the temperature anomaly in 2010 is about 0.8oC, very similar to what is actually observed today. In the 0.2% test, it is only 0.2oC, lower than in the other test, but not by as much as you might expect. Also, with time, it starts to catch up, and by 2100 it is 2oC, only about 2 times less than in the 2% test. Also, the temperature continues to rise and would eventually equilibrate at the same temperature as in the other test. 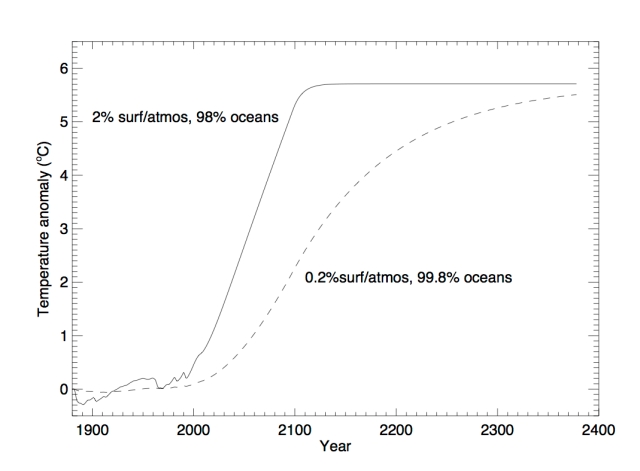 So, if the oceans were absorbing a much larger fraction of the energy excess, the surface temperature would rise more slowly, but not as slowly as one might think, and the difference would reduce with time. Why is this? It’s essentially illustrated in the figure below, which shows the change in the energy imbalance (Wm-2) with time. In the 2% test, it rises to around 1Wm-2 and remains at this level till 2100 (when the radiative forcing reaches it’s maximum value of 8.5Wm-2) and then drops as the temperature rises to equilibrium. In the 0.2% test, however, it continues rising (because the surface temperature is forced to rise slowly) to over 5Wm-2. This may be one of the strongest illustrations of why James Lovelock’s suggestion doesn’t make sense – with a 5Wm-2 energy excess, it seems completely implausible that the oceans could continue to accrue virtually all of the energy excess. 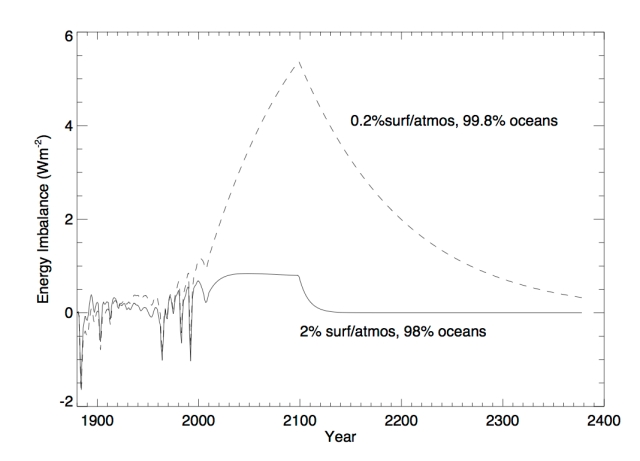 One final consequence of what James Lovelock is suggesting is what would happen to the ocean heat content. This is shown in the figure below. In the 2% test, it would rise by about 1024J before the system equilibrates. Also between 2000 and 2010, it rises by a little less than 1023J, again very similar to what’s actually been observed. In the 0.2% test, it rises by more than 1025J before equilibrating – more than 10 times more than in the 2% test. 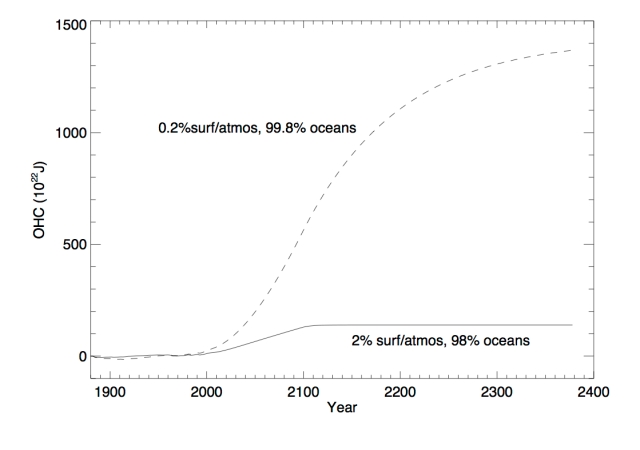 So, to be clear, what’s being suggested in James Lovelock’s quote at the beginning of this post doesn’t really makes sense, and you don’t really need to run a model to illustrate this : but I quite like seeing it demonstrated. Essentially, as expected, we can roughly match what’s been observed if the oceans absorb about 50 times more of the excess energy than the surface/atmosphere. If, however, the oceans were absorbing a much bigger fraction of the energy excess, the surface temperatures would rise more slowly, but not by as much as you might expect and it would produce an implausibly large energy excess and significantly increase the amount of energy going into the oceans. Not only would this require that this energy is rapidly transported into the oceans depths (in order to prevent the surface warming from accelerating), but 30% of the surface of the planet is land, so it seems unlikely that such slow surface warming could be sustained.

Anyway, there’s probably more that could be said, but I think this post has already become rather long and convoluted. I do hope that it makes some kind of sense, though. If you have any thoughts, feel free to make them through the comments.

18 Responses to We’ve all forgotten about the oceans!