Yesterday’s post had more impact than I was expecting. I probably should avoid calling other people jerks, even if I imply that I am one by doing so. I should also try and stick more to my resolution of not talking about hockey sticks. It is quite interesting and I’ve certainly learned a lot, but it does have a nasty habit of not being particularly constructive, nor particularly pleasant (although, it actually turned out reasonably well – so far, at least). To get back onto a more sensible track, I though I might quickly post something about a recent talk I attended. I should stress that this is not a topic about which I’m particularly familiar, so some of my explanations and terminology may be wrong. I’m also doing this from memory, so some of that might also be wrong.

The talk was about Dansgaard-Oeschger events. These are rapid warming (and then cooling) events that are seen in the Greenland ice core data. They occur during the glacial periods, and what makes them interesting is that they are thought to be internally forced (i.e., they are events that are not triggered by some external influence). The figure below shows a series of such events in the Greenland ice core data; although you should bear in mind that the x-axis is in years before present, so it shows rapid warming events followed by slower cooling. 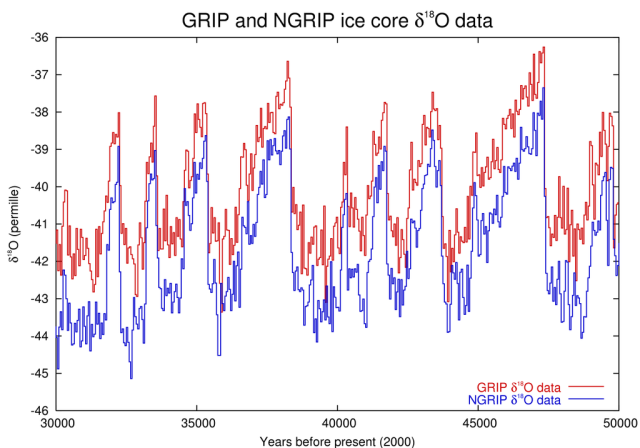 The main point of the talk I went to was to try to understand what was happening in the Antarctic at the same time as Greenland appeared to be undergoing these rapid warming events. This was done using the West Antarctic Ice Sheet (WAIS) Divide Ice Core, a new ice core that is expected to rival the Greenland Ice core in terms of depth and resolution.

As I said, this is mostly from memory (although I did find this RealClimate post that discusses some of this). My understanding is that one of the debates is about whether or not the warming signal from the Northern Hemisphere travels to the Southern Hemisphere via the atmosphere (fast) or via the oceans (slow). From this new WAIS ice core, they were able to identify a signal in the Antarctic that lagged the Greenland warming by about 200 years and that showed cooling. My understanding is that this is consistent with these events being internally forced, since if the energy in an ocean current is being used to warm the northern hemisphere, then that should produce cooling elsewhere (in the Southern hemisphere). However, these changes can be quite slow and so there is a 200 year lag between the Northern and Southern hemisphere.

Maybe the more interesting thing about the talk was that even though the time delay appeared to be suggestive of an important ocean influence, one would still expect some fast atmospheric response. If memory serves me right, the idea was that a warmer northern hemisphere should move some of the climate zones in the southern hemisphere northwards. The consequence of this is that precipitation in the WAIS would come from a more northern – and hence warmer – part of the Pacific (I think). This was then found produce some signature in another isotope (which I can’t quite remember), and so the analysis of the WAIS Divide ice core produced a signature of this change in precipitation, that was coincident with the northern hemisphere warming.

So, if I understood the talk properly, they identified a cooling in the Antarctic that lagged the Greenland warming by about 200 years and indicates a primary role for ocean currents, and then found a signature of a change in precipitation coincident with the Greenland warming, indicating an effect from a change in the atmosphere. I found it quite fascinating what they could do with these ice cores. What I’m still unsure of is what this really means about how these events are actually triggered. That there is warming in the north followed by cooling in the south seems consistent with an internal process (although the reduction in ice sheets in the north should have some impact on albedo and hence overall warming), but it still wasn’t clear if there was a convincing explanation for the actual trigger.

The other thing I’m not sure of is what the relevance is for today. Showing that internal variability can produce rapid climate shifts is clearly interesting, but this was an era with very extensive ice sheets and the rapid shifts are probably partly associated with changes in albedo. It also doesn’t suddenly mean that what we’re experiencing now is likely internal variability, since basic physics tells us that it is mostly anthropogenic. There’s of course the value in understanding our climate and how it changes in more detail, and there may be a more direct relevance than I’m not quite getting. I’m also not sure if I’ve really explained this as properly, or as clearly as I could have, so if anyone knows better, feel free to point it out.