I’ve finally got some time to write up my second post on drawing down atmospheric CO2. In the first post I was trying to get across two basic things. One was that it’s important to distinguish between the residence time for a single CO2 molecule (short), and the time over which an enhancement in atmospheric CO2 would decay back to equilibrium (long, by comparison). The other was that there is more than one carbon cycle; a fast one that cycles CO2 between the ocean, atmosphere and biosphere, and a slow one that sequesters CO2 into the deep ocean and lithosphere, and returns it via volcanic activity. The long-term, quasi-steady atmospheric CO2 concentration is largely set by the slow cycle, and hence returning to quasi-equilibrium – after an enhancement – can take a very long time (10s of thousand of years).

It is in fact, even more complicated than I indicated earlier. There are really more like three carbon cycles. There is a fast cycle that involves CO2 being taken up by the biosphere and being dissolved in the ocean. This reduces the ocean pH, changes the saturation state of the ocean with respect to calcium carbonate (CaCO3) and results in a slower cycle involving chemical reactions between CO2 and CaCO3. The slowest cycle is associated with weathering, in which atmospheric CO2 reacts with carbonates and silicates in rocks.

is the equilibrium concentration,

is the amount injected into the atmosphere, and

is the e-folding time (or adjustment time). This type of analysis leads to estimates for

years, then that would imply that 37% of the amount injected into the atmosphere would remain in the atmosphere after about 100 years. If you carry on, then you might conclude that there would only by 13% remaining after 200 years, and after 500 years, less than 1%.

This, however, is wrong. Why? Because injecting more CO2 into the system changes the equilibrium concentration associated with the fast cycle. Dissolving CO2 in the ocean increases the partial pressure of CO2 in the ocean and – consequently – increases the corresponding CO2 concentration in the atmosphere. This is illustrated quite nicely in the figure on the right, taken from Archer (2005).

It shows initial injections of 4 different amounts of CO2 and – in each case – three different calculations. One considers only the dissolution of CO2 in the oceans, and runs to 10000 years. The next considers this plus the calcium carbonate cycle, and runs to 30000 years. The final one consider all 3 cycles, and goes all the way to 100000 years. As should be clear, if you consider only the dissolution of CO2 in the ocean, then an injection of CO2 results in a stable atmospheric concentration that is higher than it was initially; the difference depending on the amount injected. For example, adding 1000 GtC will increase atmospheric concentrations from 280ppm to 350ppm. As you add the extra carbon cycles, the concentration eventually returns to what it was prior to the injection of the extra CO2. However, the overall time it takes is longer than 100000 years. 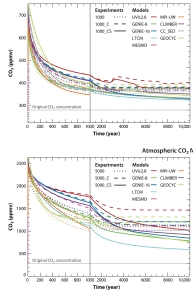 This post is getting rather long, so I’m going to leave the rest of what I was going to say for a third post. The main point I was trying to get across here is that by injecting new CO2 into the atmosphere, the concentration to which the fast cycle will tend is higher than it was before the injection of the new CO2. If we continue as we are, our cumulative emissions could exceed 1000 GtC by about 2050, 20-25% of which will remain in the atmosphere for almost 1000 years, and it will take 10s of thousands for it to return to levels similar to that before the extra CO2 was injected.

Update: Eli’s post explains what I was getting at here very well. The animation at the end is particularly good.