We’re back from our camping trip, but am still on holiday. Haven’t quite worked out what to do for the next few days, but I’m sure we’ll think of something. We had a really good time camping in Northumberland. The weather was very good, did some biking, some walking, and spent quite a lot of the time on the beach, with the kids mostly in the water. I did force them to play some cricket with me, though. Also discovered a part of the beach that was roped off as it was full of Arctic terns nesting (at least, I think that’s what they were doing). 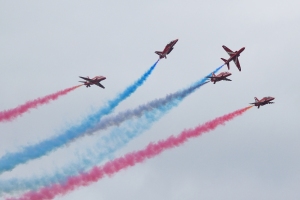 Also went to the air show at East Fortune. Haven’t been to an air show for years (the last time was in South Africa, I think). For a while, we lived very close to Leuchars, which used to have the biggest air show in Scotland, but it was so busy on the day of the air show we used to simply get away, and I didn’t ever get a chance to go to the show itself. Actually, if I remember correctly, it used to be on the same day as an annual golf day that I would normally play in. So, I’d go and play golf and leave the family to fend for themselves – either unable to leave the house, or get back to the house, until the traffic cleared 🙂 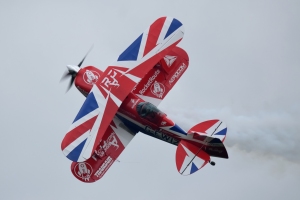 The air show was actually pretty good, with a lot of impressive aerobatics, including the Red Arrows (above), a Pitts S2S (right), a very impressive team from Switzerland, the two pilots who did this, and a number of planes I’d never seen before, such as a Catalina (below). Anyway, that’s what we’ve done so far and this was really just an opportunity for me to post some of the pictures I’ve taken. I’ll go away again now 🙂

7 Responses to Still on holiday