by the ocean. Nick Stokes has a similar post and has a nice online calculator. What I will do here is provide the python scripts for the calculations and figures that I’ll present here. 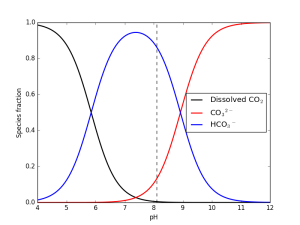 I’ll start by showing the relative concentration of the different inorganic carbon compounds plotted against pH. I should point out that in the previous post I suggested that the equations are solved by setting the total Dissolved Inorganic Carbon (

) and then solving for

, but in this case the pH is fixed, giving

, which can then be used to get the concentrations of the other inorganic carbon compounds (which are then plotted, relative to

When the pH is small, the

is large and the inorganic carbon is mostly aqueous

. At current pH levels (shown by the vertical dashed line), however, only a small fraction is aqueous

, which then has an impact on the amount of anthropogenic

that can be taken up by the oceans. I’ll discuss this again a little later in this post. If you would like the python script that produced the figure on the right, you can get it here. I think this figure is illustrating what Nick Stokes is suggesting in this comment, but I’m not completely sure.

Figure showing how the atmospheric CO2 concentration varies with temperature for fixed DIC and TA.

Something else you can do is look at how the atmospheric

) varies with temperature. In this case the

) are fixed and the equations are solved as described in the previous post. What this shows is that an increase in atmopheric

from 280ppm to 400ppm due to ocean outgassing alone, would require an increase in temperature of about

, which clearly does not make any sense; as is probably clear to most who will read this, the rise in atmospheric

is almost entirely anthropogenic. The python script that produced this figure is here. 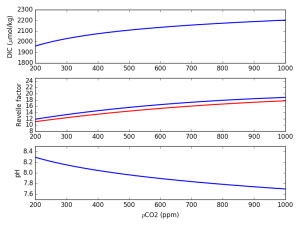 The last thing I was going to discuss was how the

, which is shown in the top panel in the figure on the right. I’ve also included that the temperature will also changes with

, and assumed an ECS of

. The relationship between changes in atmospheric

The red line is the above calculation, while the blue line is the Revelle factor determined from the data plotted in the upper panel. They don’t exactly match, but they’re pretty close and have the same form. If you would like the python script that did the calculation and produced the figures, it is here.

The middle panel in the figure on the right shows that, for current conditions, the Revelle factor is about 10. This means that the fractional change in atmospheric

will be 10 times bigger than the fractional change in

. For example, if the atmosphere has about 750GtC, while the ocean contains about 30000GtC, then if we emitted 2000 GtC, a Revelle factor of 10 would imply that – after ocean uptake – about 20% would remain in the atmosphere. This is just a rough approximation; this paper presents a more detailed calculation (see the middle panel of Figure 2). The middle panel of the figure on the right also shows that the Revelle factor will increase with increasing emissions; the ocean will take up a decreasing fraction of our emissions. The bottom panel shows the change in pH with

, showing that the pH decreases as the atmospheric

This has got a little long, but hopefully illustrates some of the carbonate chemistry of seawater. There are a number of aspects that I haven’t considered, such as the timescale over which atmospheric

will be drawn down, and reactions with calcium carbonate (

), which can further draw down atmospheric

. To elaborate on this, I will simply quote part of the abstract of this David Archer paper (David Archer, very kindly, clarified some of this via email).

As I’ve already said, I’m no chemist, so hopefully I’ve got this about right. There is probably much more that could be said, and some subtleties that I may have missed. If anyone would like to elaborate, or clarify, feel free to do so via the comments. This is really mostly a chance for me to learn something while, hopefully, not confusing others 🙂 .

Eli has a post about The Revelle factor and also includes some discussion about the role of calcium carbonate.