Never failing to disappoint, David Rose is back with a new expose on how world leaders were duped into investing billions over manipulated global warming data. It refers to a paper published by Karl et al. in 2015 in which they suggested that there were [p]ossible artifacts of data biases in the recent global surface warming hiatus. David Rose has, however, found a whistleblower who has come forward to highlight how the data in this paper was manipulated. This whistleblower is a recently retired NOAA employee who apparently has an impeccable reputation. Of coure, David Rose appears not to have consulted any others who might also have impeccable reputations. Also, to suggest that this one paper was the primary influence in recent decisions about global warming is utterly bizarre, especially as this paper didn’t really change our basic understanding at all. 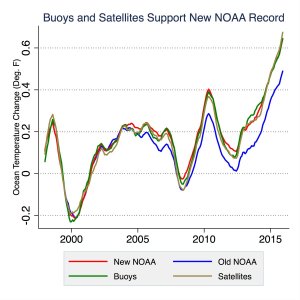 I probably don’t have to say very much (I may, as usual, fail) since Zeke Hausfather has already written a Carbon Brief post and Victor Venema has also already covered it. The basic suggestion in David Rose’s article is that the authors of the Karl et al. paper didn’t follow the correct procedure for verifying the data that was used and didn’t archive it properly. He also claims that the lead author insisted on choies that maxmised warming and minimised documentation. Well, as far as I can tell, all of the necessary data is here. Also, the David Rose article appears to largely ignore the recent Hausfather et al. paper which indicates that the corrections made in Karl et al. (2015) are consistent with buoys and satellites (illustrated in the figure on the right).

David Rose’s article also includes the figure below, which purports to show that the NOAA data was adjusted to show higher temperatures. Well, this is immediately odd in that the issue is really the trend (i.e., how fast is it changing), not the actual temperature values. Also, the difference is almost entirely because NOAA presents their temperature anomalies relative to a 1901-2000 baseline, while HadCRUT4 presents theirs relative to a 1961-1990 baseline. If you shift them to have the same baseline, the discrepancy goes away. The immediate conclusion one might draw is that the figure below is intentionally misleading, but I wouldn’t rule out the possibility that David Rose simply does not understand the concept of a temperature anomaly, despite have written many articles about them.

There’s probably not much more to say. The Karl et al. corrections appear to have been confirmed by (or, are consistent with) Hausfather et al. (2017), and the temperature anomaly figure in David Rose’s article is highly misleading. Yes, he’s found someone to complain about how the authors of Karl et al. conducted themselves, but a scientist going to the media to do so, is also a highly unusual way to conduct oneself. At the end of the day, we’d really like to better understand how global temperatures are changing and – as it stands – it appears that Karl et al. made a positive contribution to our understanding. That’s ultimately the goal of research.

288 Responses to Expose: David Rose does not understand baselines