I came across a response, by Matt Ridley, to Tim Palmer’s talk. I’ve posted Matt Ridley’s response below. One interesting aspect of his response is that it is written as if he is someone with the expertise to actually debate the science. Of course, it’s a free world, so anyone can choose to do so, and Matt Ridley does have a science PhD (DPhil actually), but his research work was in biology (which he himself points out) and he hasn’t – as far as I’m aware – been actively involved in research for over 30 years. So, his science background is not really relevant to climate, his career has mainly been in journalism, banking and politics, and yet his response does not make any of this clear. It’s not necessarily required, but I do think most would acknowledge this type of thing.

Anyway, his response is below and I’ll make some specific comments below it. 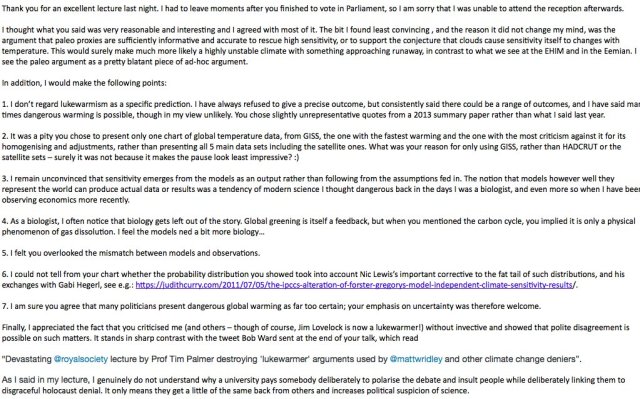 It’s clear that Matt Ridley does not like Bob Ward.