The Only Way Not To Lose Is to Play

(Guest article by Michael Tobis; opinions are mt’s only)

There’s a lot of talk about a “red team” critique of climate science from the quarters that have aligned themselves as critics of the mainstream. This has recently been taken up by the secretary of the US Department of Energy, Rick Perry, so suddenly the idea has legs.

All too often, extraordinarily harsh criticisms are aimed at physical climatology, a field which is much maligned and, partly as a consequence, woefully underestimated.

Look, the earth is many things, but one of the things it is is a physical object in space with physical properties. As such it is well-observed and extremely interesting. Admittedly, it’s also very complex, but there’s no fundamental reason that physical science would fail to grapple with the earth as an object. And it hasn’t.

The knowledge of the earth, as an object that responds dynamically to the physical laws governing its properties, is deep and rich and admirable. It’s not the fault of the science that it has a result of consequence to deliver.

In fact, were it not for climate disruption (a.k.a. “global warming”) there’s a good case to be made that climatology would be taking over from physics as queen of the sciences in the computational era.

While there’s a sound foundation for climatology that (barely) predates the computational science era (essentially the basics of physical climatology were codified in a 1967 monograph by Ed Lorenz) it’s the progress that has been made since the first successful general circulation models that makes the field so exemplary of modern, computationally driven science.

All of this is buried under all the ridiculous noise. Climate disruption is a problem, and there are those who seek to obscure that fact for selfish reasons. So they malign the science, even though the core of it is a triumph that should be celebrated.

I’m not under any misapprehension that the impetus for the “red team” isn’t very much under the influence of this malice. The revulsion of the climate community (“we’ve been red-teaming each other for decades!”) is therefore understandable.

I’d like to advocate that we resist this visceral response and embrace this as an opportunity.

First, there’s an obvious disadvantage to eschewing the effort. And second, there’s an advantage to participating in it. In a subsequent essay I will propose a specific strategy. For now, I’ll just explain why I think we should play.

Let’s make no mistake about whom to expect on the “Red Team” as implemented by the current US administration: the usual hacks whom the Republicans call to testify before congress, i.e., people of modest competence whose claims happen to align with what Republicans want to hear. (It’s a career strategy after all – whether this is a matter of conscious hypocrisy or incompetence or some complex combination of the two is a matter of relative indifference. The point is that these people don’t constitute a credible red team).

Rejecting this plan out of hand, however, has the very severe disadvantage that it can be used as evidence for the most extreme claims about climate science – explicitly that we argue from authority and have no significant evidence behind our claims; implicitly that we have no substantive science at all and exist only to advance an agenda.

Standoffishness on our part results in an immediate win for our most  irresponsible opponents. It looks as if we can’t bear criticism, even if what we are having trouble bearing is stubbornly obstinate irresponsible attacks.

Embracing the red team idea requires that we insist on fairness.

We must make a case that if the “red team” is constituted by people we consider hacks, we should have as much opportunity to critique them as they do us. What we need is some impartial, scientifically competent referees, or else an intellectually uncommitted, scientifically competent red team. If the “red team” is the likes of Curry, Christy, Happer etc., they’ll be doing the usual thing – presenting an incompetent muddle as a reasonable alternative to a mature science. They may honestly not know better, but the scientific community does, and we need some way to objectively make that case.

Or, we could be happy with a conventional red team, where people of extraordinary competence and no axe to grind were brought in to revisit the evidence.

As long as we could ensure participation by somebody other than the usual NIPCC gang, whether as the red team or as adjudicators of the exercise, we could make lemonade out of these lemons.

Of course, we aren’t really talking about science, but about politics hiding behind science’s skirt.

As Gavin Schmidt points out: 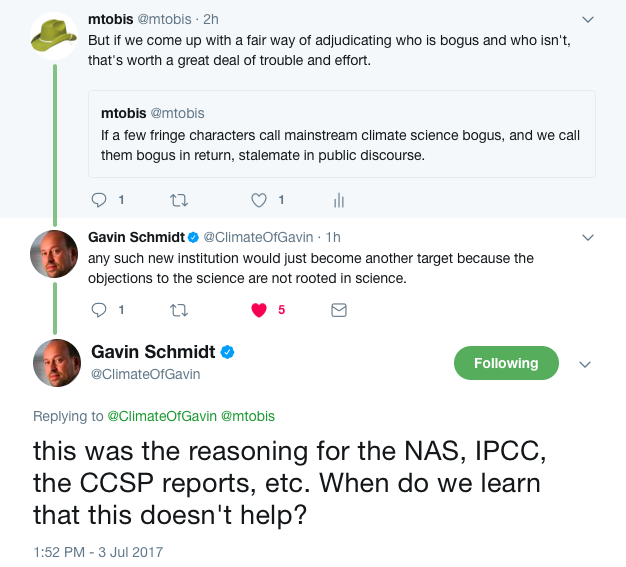 I don’t suppose there is a final victory over the forces of denial in prospect.

But I think we can hardly do worse than boycott this exercise. What’s more, I suspect we can do even better than to merely defang this effort and make yet another mainstream report.

I suggest we can frame this in a way that the truth can’t really lose at all.

The short version is this: why can’t they build a decent climate model with low sensitivity? If they could, that would be a real red team effort, not just a bunch of posturing hacks. If they can’t, well then, there is no meaningful red team critique possible.

I’ll expand on this in another essay soon.

This entry was posted in Uncategorized. Bookmark the permalink.