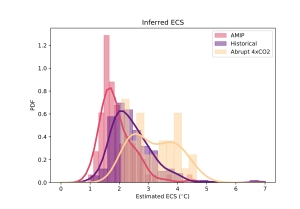 The basic result is shown on the right. The abrupt 4xCO2 simulations produe a broad ECS distribution with the highest ECS best estimate. The historical produce a lower estimate which suggests that feedbacks might become stronger in the future. The simulations with prescribed sea surface temperatures and sea ice concentrations produce even lower ECS estimates. This suggests that

recent decades appear to have experienced a pattern of sea surface temperatures that excited unusually negative feedbacks in tropical marine low clouds, leading to an even lower estimate of climate sensitivity than would have been expected under more usual historical conditions.

I don’t know that I need to say much more. This is another paper suggesting that observationally-based ECS estimates tend to be biased low, partly because feedbacks are likely to become stronger in the future, and partly because the pattern of sea surface warming in recent decades has lead to less warming than might have been typically expected. It doesn’t mean that this is necessarily right, but does suggest that

ECS estimates inferred from recent observations are not only biased, but do not necessarily provide any simple constraint on future climate sensitivity.