Over the last ~800000 years, the Earth has undergone a series of cycles in which it has switched from being in a glacial, with large ice sheets, into an interglacial, with small ice sheets. Known as glacial cycles, these are associated with orbital variations called Milankovitch Cycles, and typically involve global temperature changes of ~5oC, and ~100ppm changes in atmospheric CO2 (changing from ~180ppm to ~280ppm, and then back again). 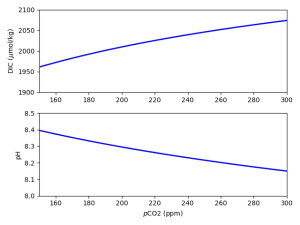 One of the puzzles associated with these cycles is how atmospheric CO2 can have a period where it settles to ~180 ppm, and then another period where it settles to ~280ppm. My understanding of why this is an issue is illustrated by the figure on the right. If you consider the basics of carbonate chemistry (which I discuss in these posts) then the regions of the ocean that exchange CO2 with the atmosphere should have substantially different pH and DIC (Dissolved Inorganic Carbon) levels during these glacial and interglacial periods.

Given that low atmospheric CO2 is associated with high pH and low DIC, what the above implies is that during the glacial periods, a large amount of CO2 must be sequestered in a region that doesn’t exchange with the atmosphere. It can’t be sequestered in the lithosphere because the timescales for doing so is too long. It also can’t be the biosphere. What seems likely is that, during glacial cycles, a large amount of CO2 is sequestered into the deep ocean in such a way that it is not able to exchange with the atmosphere. When we move into an interglacial, this CO2 is released, and atmospheric CO2 rises. 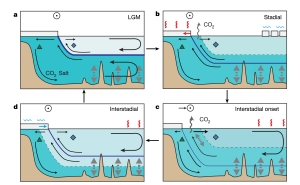 The reason I’m writing about this is that I came across an interesting paper by James Rae, who I met when I went to see Katharine Hayhoe speak in Edinburgh. The paper is about CO2 storage and release in the deep Southern Ocean on millennial to centennial timescales. The basic idea, as illustrated by the Figure on the left, is that during a glacial maximum, extensive sea ice in the Southern Ocean essentially prevents portions of the deep ocean from exchanging with the atmposphere, sequestering CO2 in these regions of the ocean. As the sea ice retreats, these regions can then exchange with the atmosphere, and atmospheric CO2 rises. 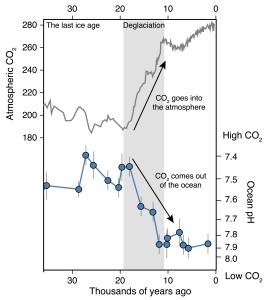 What Rae et al. (2018) did is to look at deep-sea coral boron isotope data that track the pH — and thus the CO2 chemistry — of the deep Southern Ocean over the past forty thousand years. What they found is shown in the figure on the right. What it indicates is that as we moved from the Last Glacial Maximum (LGM) into the current inter-glacial, the pH of the deep Southern Ocean increased. This is consistent with the deep Southern Ocean sequestering CO2 during the LGM and then releasing it as we moved into the inter-glacial. As I mentioned at the beginning of this post, this is also the opposite of what we’d have expected if this region had been exchanging CO2 with the atmosphere during the LGM.

So, this new work may have resolved one of the puzzles associated with the glacial cycles and demonstrates that a large amount of CO2 was indeed probably sequestered in the deep Southern Ocean during the glacial periods.

Update:
My explanation at the beginning of the post may be wrong, but it’s getting late so I will think about this a bit more if I get a chance tomorrow.

Just to add that I think my explanation is broadly correct (although maybe not entirely). As this article, highlighed by BBD, points out you can’t explain the ~100ppm change as simply due to enhanced uptake by the oceans when it cools. I played around a bit with my carbonate chemistry code and to get a 100ppm reduction in atmospheric CO2 with a 5oC reduction in upper ocean temperature would seem to require the ocean pH goes up and the DIC goes down, which doesn’t really make sense if the upper ocean is taking up CO2. Additionally (as the article highlighted points out) the changes to the biosphere and changes to ocean salinity (due to ice sheet changes) further inhibits this. Therefore, there must be somewhere else that the CO2 is being sequestered during glacial maxima.

21/11/2018: I’ve edited the first paragraph to clarify that the climate variations are typically referred to as glacial cycles, while Milankovitch cycles are the orbital variations that are thought to be involved with triggering these glacial cycles.