The Plausibility of RCP8.5 – part II

A while ago I wrote a post about the plausibility of RCP8.5. It was essentially pointing out that there are a range of emission pathways, and hence cumulative emissions, that could lead to an RCP8.5 concentration pathway. Some of them are low enough that we would need to start substantial emission reductions quite soon if we wanted a high chance of avoiding an RCP8.5 concentration pathway. 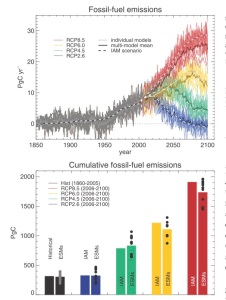 The key thing to note is that there is a range of possible emission pathways for each concentration pathway, and that the range of cumulative emissions that can produce a specific concentration pathway is quite high (represented by the black dots in the lower panel). In the case of RCP8.5, the mean from 2006-2100 is 1734GtC, but the 1

Something else to note is that for the higher concentration pathways (RCP6 and RCP8.5) the estimates from Integrated Assessment Models (IAMs) tend to be higher than the estimate from Earth System Global Circulation Models (ES-GCMs). In other words, the ES-GCM results suggest that avoiding RCP8.5 would require emitting less than would be suggested by IAMs. This is all summarised in the Table below.

Just to be clear, I don’t think it is particularly likely that we will follow an RCP8.5 concentration pathway. However, I don’t think it’s as unlikely as some like to suggest. Based on the Figure above, we could end up on an RCP8.5 concentration pathway if we double our emissions from ~10GtC/year today to ~20GtC/year by 2050. Given that we expect the global economy to keep growing and that there has been a relationship between emissions and GDP, avoiding doubling our emissions in the next few decades will require decoupling emission growth from GDP growth (well, assuming that the global economy does indeed continue to grow). There are hints that this is starting to happen (we’ve seen economic growth over a period where emissions have grown little) but I do think we should be careful of assuming that this will continue.

39 Responses to The Plausibility of RCP8.5 – part II