This is a guest post by Karsten Haustein, a researcher in the School of Geography and the Environment at the University of Oxford. The post is about a new paper that discusses their real time global warming index.

Have you ever wondered what the current level of human-induced warming really is? Well, here is something that might help.

Published in one of the more recent Nature spin-offs (Haustein et al. 2017), we introduce a real-time Global Warming Index (GWI) which provides an estimate of the fraction of anthropogenically caused warming up to the current date (or even second for that matter).

The initial idea was put foward in a paper led by my colleague and co-author Fredi Otto (Otto et al. 2015), using annual data only. Since it didn’t come with an uncertainty analysis, we went back to the drawing board, updated all the forcing estimates and included a sophisticated uncertainty analysis based on the best available science to date. The result is made publicly available on the aptly named globalwarmingindex.org website. The index is updated monthly as soon as the lastest global temperature estimate is released. In the meantime, the counter on the top of the website extrapolates the current (10-year) warming trend up until the current second.

The basic idea in a nutshell: the temperature response to any given change in external radiative forcing (accounting for fast and slow responses, with e-folding response times of 4.1 and 219 years, respectively) is regressed against global mean surface temperature; with the resulting slope determining the magnitude of the forced signal. This is done separately for anthropogenic and natural forcing contributions. The former includes greenhouse gases (CO2, ozone, methane, a variety of trace gases), land use change and aerosol effects (direct and indirect for SO2, NH3, OC, BC, as well as BC on snow), whereas the latter includes explosive volcanic eruptions and changes in solar incoming radiation. Apart from the associated forcing uncertainty, we have also accounted for response model uncertainty, observational uncertainty and last but not least uncertainty due to internal variability. 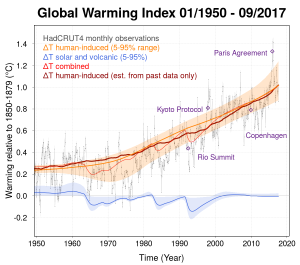 Figure 1: Global Warming Index from Jan 1950 to May 2017 for HadCRUT4. The anthropogenic contribution in orange (with 5–95% confidence interval). The natural contribution (solar and volcanic) in blue. The red line shows the combined (total) externally-driven temperature change. The dark red line shows the evolution of the GWI when only past forcing and temperature data are used. The thin black line are the monthly (HadCRUT4) GMST data. For illustration, blue diamonds indicate when major climate summits took place in context of the monthly GMST at that time. (Figure 1 in Haustein et al. 2017)

Since anthropogenic forcing components tend to change slowly over time (for example, greenhouse gases are well-mixed in the atmosphere and therefore concentrations increase fairly linearly), short-term fluctuation from ENSO or volcanic eruptions are effectively filtered out. We have demonstrated the robustness of the index by going back in time to re-assess what the attributable warming would have been (see figure 1 which is an updated version of Fig 1 in the paper). Turns out, the inappropriately named “hiatus” left no more than a barely visible dent in the index estimate. That said, it is important to understand that – by construction – the GWI is controlled by the forcing rather than the temperature. Hence the fact that the trend appears to be increasing during the last 5 years (the current rate of warming based on 10 year trends is +0.16-0.17K/decade as shown in figure 2) or so is somewhat worrying, as it merely reflects an accelerated increase in radiative forcing, primarily due to an upward revision of methane forcing.

This is one of the strengths of our index: it shows straight away why we shouldn’t have been surprised by the rapid temperature uptick during the strong 2015/16 El Niño, as much as we shouldn’t expect the temperatures to ever go back down to pre-2014 levels (barring a strong volcanic eruption).

Given that the latest IPCC report (AR5) provided a quantitative assessment of the human-induced warming for the 1950-2011 period only, the public was left guessing what the fraction of anthropogenic warming since pre-industrial times really is. This has now also changed, and we certainly hope that our work fosters a more conclusive statement in the next IPCC report. 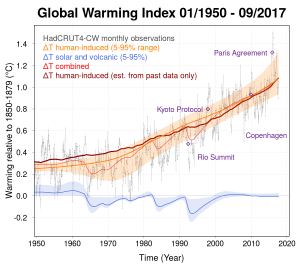 We note two more things: (1) the exact definition of what “pre-industrial” means remains somewhat contentious. While the 1850-79 period chosen in our paper is defensible given the rather small amount of greenhouse gas induced radiative forcing before that time, there is still some debate about the optimal definition (see Hawkins et al. 2017 for more details). (2) Despite having accounted for observational uncertainty, the bias due to the missing coverage of the Arctic in HadCRUT4 is larger than their error model suggests. Hence the choice of the observational temperature dataset is adding to the overall index uncertainty as highlighted by the figure on the right (Figure 3), by comparing the GWI based on HadCRUT4 with the version using HadCRUT4-Cowtan/Way (Cowtan et al. 2015). The index goes up from 1.02°C to 1.08°C. Using Berkeley Earth instead (not shown), the index is as high as 1.12°C. Arguably, HadCRUT4 is biased low and so is the associated GWI estimate. Eventually, infilling will become the standard and the products should converge in the not-so-distant future.

Together with continuously updated estimates of the ocean heat content and Earth’s energy imbalance (see for example von Schuckmann et al. 2016), we believe that the GWI is a helpful tool to monitor of the state of the rapidly changing (near-surface) atmosphere in real-time. It neatly bridges the information gap caused by the periodic nature of our academic assessments.

For more information, we refer to the Supplementary information and the info page on our website. Also, we encourage everyone to download the accompanying spreadsheet and play around with it 🙂

Finally, all credit belongs to my co-authors Fredi Otto, Piers Forster, Dave Frame, Dann Mitchell and Damon Matthews in general, and Myles Allen, who had the original idea, in particular.