The latest National Climate Assessment has just been released (National here means the USA, if you want the UK Climate Projections you can get them here). It’s already proved somewhat controversial, mainly because of a headline figure that following a high-emission pathway could reduce GDP by 10%. 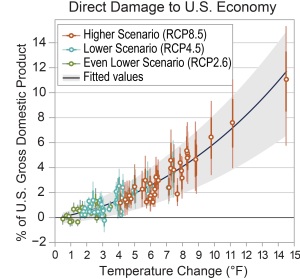 The reason it’s controversial – as shown by the figure on the right – is that the 10% reduction in GDP is associated with a very high level of global warming (15F ~ 8C). This result comes from this paper. As I understand it they used a broad range of climate models to generate a large number of spatiotemporal realisations of temperature and precipitation. The probability of each realisation was then based on the distribution of 21st-century global surface temperature changes being consistent with what is expected. Therefore, their distribution of results for each RCP is consistent with expectations, but 8C (15F) of warming by 2100 is still on the tail of this distribution. It’s not impossible, but is highly unlikely. It’s essentially a tail risk, and this was not made clear in the coverage.

However, what seems to be mostly over-looked is that the study being promoted is suggesting that 8C of global warming would only lead to something like a 10% reduction in GDP (in the USA). If we had 8C of global warming, parts of the planet would temperature and humidity (wet-bulb temperature) increasing to levels where we would find it physiologically difficult to survive. For example, this paper, by Sherwood & Huber, says

We conclude that a global-mean warming of roughly 7 °C would create small zones where metabolic heat dissipation would for the first time become impossible, calling into question their suitability for human habitation. A warming of 11–12 °C would expand these zones to encompass most of today’s human population.

To be clear, I’m not suggesting that this level of warming is likely; it isn’t, even under a high emission scenario. The issue, in my view, is an economic analysis that still returns a reasonably low impact on GDP, despite warming that would lead to parts of the planet becomining potentially uninhabitable.

My understanding (and I’m happy to be corrected if it’s wrong) is that these economic analysis don’t actually self-consistently model the economic systems. What they do is develop empirical estimates for how various economic sectors respond to changes in temperature and precipitation. They then use this to develop damage functions that can be used to estimate the economic response to various future climate pathways.

I am always reluctant to be too critical of scientific analyses in fields outside my own, since it’s very likely that there are things I don’t understand. However, we are talking about a level of warming well beyond what Kevin Anderson would describe as incompatible with organised global community. Similarly, John Schellnhuber is quoted as saying the difference between two and four degrees is human civilisation.

So, if serious climate scientists think that the impacts of 4C of warming would be quite dire, why should we have any confidence in economic analyses that suggest that even 8C of warming will have a relatively small impact? It would be great, however, if someone could provide a strong argument as to why these estimate are robust. On the other hand, it’s my understanding that there is quite a lot of debate about exactly this issue amongst economists, and others who work in this general area.

Possibly, one way to think of this is that it’s mainly a way of estimating a potential carbon tax. If this is too low, or too high, then future estimates will take this into account and it can be suitably adjusted. On the other hand, if we regard these estimates as indicating that the economic impact will be minimal – even from extreme levels of warming – and we do nothing, we can’t go back and adjust what we do if this conclusion is wrong. There are benefits to acting now, rather than later.