Given that I wouldn’t mind a break from the climate wars (although I don’t think I’m quite as cured as Stoat suggests he is), I thought I might write about something completely different. From 1958-1976, the Soviet Union had a fairly extensive Lunar programme. One of these missions, Luna-3, was the first to take a picture of the far side of the Moon (Note : not The Dark Side of the Moon). This particular satellite had a highly eccentric (elliptical) geocentric orbit and, after 11 orbits, is thought to have re-entered the Earth’s atmosphere, and burned up.

That this was likely to happen had actually been predicted by a Soviet scientist called Michail Lidov. The reason was that the satellite’s orbital plane was highly inclined with respect to the Ecliptic (Earth-Sun) plane, and perturbations from the Sun and the Moon were causing the eccentricity and inclination of the satellite’s orbit to oscillate. If it hadn’t burned up in the Earth’s atmosphere, it would eventually have returned to its initial orbit. This is illustrated in the figure on the right, which is actually a test case from Naoz et al. (2011), but which I’ve reproduced myself. The plot shows

is the eccentricity of the inner orbit, against time and shows that an outer perturber can cause

to vary from being very small (close to 0 – circular) to very close to 1 (highly elliptical). This effect was also described, at about the same time, by a Japanese astronomer called Yoshihide Kozai, and is often referred to as simply the Kozai mechanism. I think Kozai-Lidov is more appropriate. 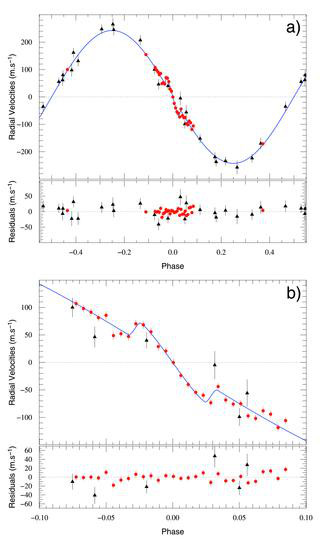 So, why am I telling you about this? Well, there are two main ways to detect planets around other stars, more commonly know as exoplanets. One is to observe a star’s spectrum, to see if there is any shift in the star’s spectral lines. If there is, then you can use the Doppler effect to determine the radial velocity of the star. If the radial velocity shows some kind of cyclical (or sinusoidal) behaviour, then you can infer that something is in orbit about that star, and you can then infer the mass of this object, and some of the properties of its orbit. The other method is to simply observe a star and see if there are periodic dips in its brightness. If there are, you can infer that something must be passing in front of, or transiting, the star and, if it is periodic, it must be an object that is orbiting the star.

The top panel of the figure on the right, taken from Triaud et al. (2010), shows a typical radial velocity curve for a star that has a Jupiter-like planet orbiting with a period of just over 1 day (known as a hot Jupiter). In this system, the planet also transits/eclipses the star. If you zoom into the radial velocity curve near where the radial velocity is close to zero, you notice a kink in the curve. The reason for this is that the star is spinning as well as moving in an orbit. Typically, the spin of the star cancels (as much coming from one side as the other) but during a transit, the planet first blocks one side (making the star appear to be moving away from us faster than it actually is) and then the other (making the star appear to move towards us faster than it actually is). The shape of this kink tells us that the star must be spinning in the same sense as the planet is orbiting, just as it is in our own Solar system, and just as we’d expect if planets form out of discs formed from material with the same angular momentum as the material that formed the star.

Okay, so we’ve shown that an extrasolar planet orbits in the sense that we would expect based on conservation of angular momentum and based on our understanding of our own Solar system. Now look at the figure on the left. It’s the same kind of system as that we’ve discussed already (a hot Jupiter that transits its host star), but now the kink is opposite to what it is in the earlier figure. Now, when the planet transits, the star first appears to suddenly start moving towards us, rather than away, and then it appears to start moving away from us, rather than towards. What this tells us is that in this system, the planet is orbiting in almost the opposite sense to the spin of its parent star; very different to what we’d expect. The planet is in an almost retrograde orbit and, given conservation of angular momentum, we wouldn’t really expect planets to be able to form with such orbits.

So, how does such a planet form? Well, we think its the same basic process that caused Luna-3 to re-enter the Earth’s atmosphere and burn up after 11 orbits. We think that there must be a third body (probably stellar) on an orbit inclined with respect to the initial orbit of the inner planetary system which causes the inner system to undergo Kozai-Lidov cycles producing large variations its eccentricity and inclination. In this case, however, if it comes very close to its parent star, the parent star can tidally influence the planet, causing its orbit to shrink and circularize, but with a very different inclination to what it had initially.

So, there we have what is hopefully an interesting science story that goes all the way from understanding how the orbits of satellites can be perturbed by the Moon and the Sun, to explaining why some exoplanets appear to orbit their stars on planes inclined with respect to the plane on which we’d expect them to have formed.