There has been quite a remarkable thread on Judith Curry’s blog called quantifying the anthropogenic contribution to atmospheric CO2. Remarkable for a number of reasons. One being that Judith would post it without comment. What Judith says in the comments is also surprising. It’s also remarkable in terms of the the arguments some seem willing to make to justify a natural contribution to the rise in atmospheric CO2. It is, however, also remarkable in the sense that some people who I had never found particularly sensible, actually did seem to accept something that is virtually certain. A silver lining, shall we say.

What has prompted this post, however, is me remembering that Steve Bloom had pointed out that there is evidence that many people do not understand the concept of accumulation. It comes from a paper called why don’t well educated adults understand accumulation: A challenge to researchers, educators, and citizens, by Cronin, Gonzalez and Sternam (2009).

The basic issue relates to the difference between a stock and a flow or, what we in physics might call a quantity and a flux. A stock is the amount of something that exists in some volume/location, and a flow is the amount of that something that flows into and out of that volume/location, over some time interval. The crucial point is, though, that the rate of change of the something at that location depends on the net flow; i.e., the difference between how much is coming in and how much is leaving. A classic example would be debt versus deficit. A debt is how much is owed at any instant in time. A deficit is a situation where – over some time interval – the expenses exceed the income. If there is a deficit, therefore, the debt must be growing. The confusion, apparently, is that some think that if the deficit goes down, so does the debt. This isn’t correct. If the deficit goes down, then the rate at which the debt is growing decreases, but it is still growing. The deficit would have to go to zero for the debt to remain constant, and there would need to be a surplus (income exceeding expenses) for the debt to start dropping.

Okay, I’ve written this all a bit quickly, but I do think it is an interesting issue. It does seem as though many don’t quite get the subtlety between stocks and flows, which is certainly important if you want to understand something like the accumulation of CO2 in our atmosphere. I thought I would finish with an example from the first paper I mentioned. The graph below shows the number of people entering (solid line) and leaving (dashed line) a store every minute. There are two questions to consider: during which minute were the most people in the store, and during which minute were the fewest people in the store? It’s explained in the paper, so if you want to try and answer in the comments, don’t cheat. Also, if you do provide an answer, don’t explain it; let others have a go too. 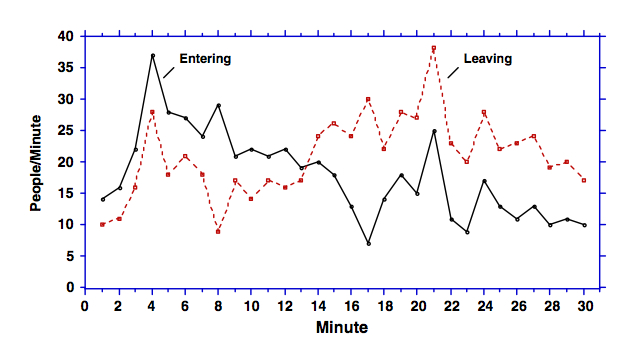 69 Responses to Stocks and flows