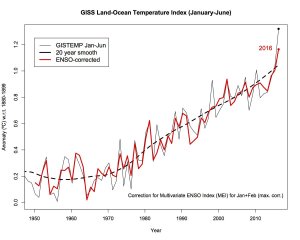 David Rose, however, has an article in the Mail Online suggesting that Stunning new data indicates that El Nino drove record highs in global temperature suggesting rise may not be down to man-made emissions. The idea being that there has been a sudden, substantial drop in temperatures, indicating that the rise was mainly due to the El Nino event. Wow, amazing, where did he get this from? Well he got it from David Whitehouse, via the Global Warming Policy Foundation. In other words, his article is based on an unpublished piece of work, posted on a cimate denial site, by someone who has virtually no expertise in climate science.

I also downloaded the data from the RSS ftp site. The figure on the left shows the monthly anomalies in the lower troposphere, land only data, with the red line showing the OLS trend. The data set that they’ve used to argue El Nino events dominate the rise in temperatures shows a long-term trend of 0.18K/decade; this really can’t be due to El Nino events. I couldn’t get the stats package to work on python, so I couldn’t estimate the uncertainties, but using the Skeptical Science Trend Calculator, I would guess it’s around 0.06K/decade (although, the SkS calculator uses TTT global, rather than TLT land).

This all seems rather desperate to me. Use a dataset that doesn’t even measure global temperatures, nor the surface, to argue that the recent rise in global surface temperatures is primarily due to the El Nino event, rather than being due man-made emissions. Sometimes all you can do is laugh.