A while ago Judith Curry wrote a rather confusing post about the IPCC’s attribution statement (that more than 50% of the warming since 1950 was anthropogenic). Gavin Schmidt responded on RealClimate, and Judith Curry has been promising to respond to Gavin’s article for quite some time. Well, the response is now here and it is a classic. It appears to be related to there being some confusion regarding the meanings of the terms most, more than half, and > 50%.

I’m slightly surprised that Judith is confused by these terms, so I thought I would parse the IPCC statement to try and help. The IPCC attribution statement in question is below, and I’ve inserted bolded bits to try and explain the terms in question:

It is extremely likely (in IPCC speak, this means more than 95% probability) that more than half (this means > 50%) of the observed increase in global average surface temperature from 1951 to 2010 (this is the thing that the other thing is more than half of) was caused by the anthropogenic increase in greenhouse gas concentrations and other anthropogenic forcings together (us). The best estimate of the human induced contribution to warming is similar to the observed warming over this period (we probably contributed most).

This is nicely illustrated in the IPCC attribution figure, which I reproduce below. The orange bar is the net anthropogenic contribution, and the black bar is the observed warming between 1951 and 2010. It shows that the best estimate for the anthropogenic contribution is that it contributed most of the warming since 1950 (in fact, probably slightly more than most). The error bars are likely ranges, which means > 66% probability. To get the 95% probability, you need to extend these by a factor of 2. It’s clear that even if this was done, these error bars would still not be large enough to really allow for less than half of the warming being anthropogenic. Therefore, it is extremely likely (> 95% probability) that more than half (> 50%) of the warming between 1951 and 2010 was anthropogenic (us). 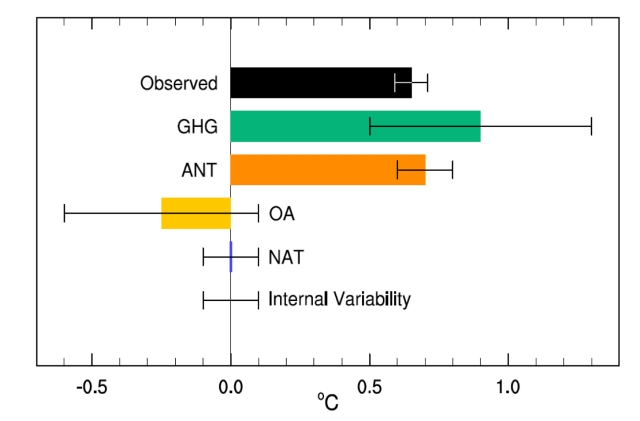 So, I’m somewhat surprised that Judith was confused by this attribution statement. It seems fairly clear to me. I did end up in a brief Twitter exchange with Judith Curry, in which the following exchange took place