I thought I might briefly highlight the recent Cowtan et al. paper Robust comparison of climate models with observations using blended land air and ocean sea surface temperatures. As Ed Hawkins points out, it’s really an attempt to do an apples-to-apples comparison of global temperatures. Dana has already covered this, as has Tamino. 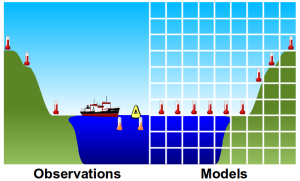 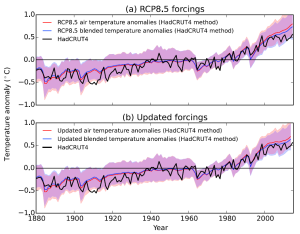 From what I can see, this is a pretty obvious thing to do. If you’re going to compare models and observations, you really should compare like with like. One might ask why it hasn’t been the norm in the past, but I suspect that that may simply be because it wasn’t expected to make too much of a difference; in most fields you wouldn’t normally have to deal with pedantic nit-picks. As expected, the usual suspects don’t seem to like this new result. I made the mistake of reading some of the Bishop-Hill comments; the least optimal combination of nasty and ignorant. Personally, I think it’s a very interesting piece of work which does something that seems pretty obvious in retrospect and will probably help to improve model-observation comparisons.

44 Responses to A better comparison