Fabius Maximus has a guest post on Climate Etc. in which he focuses on RCP8.5. RCP8.5 is a Representative Concentration Pathway (RCP) that leads to a change in forcing of 8.5Wm-2 in 2100. Focusing on this particular RCP seems to be a bit of a theme at the moment. There appears to be two basic arguments. Those who describe RCP8.5 as business as usual (BAU) are wrong (and probably activists), and we should be assigning probabilities to the emission pathways associated with the various RCPs. As far as referring to RCP8.5 as BAU, I don’t particularly care. It just seems to be an argument about terminology. I’d rather engage with what someone is intending to say, than with some pedantic interpretation of the words they’ve used. If someone defines BAU as a pathway in which fossil fuels continue to dominate, and in which emissions continue to increase, then that seems reasonable to me. If someone wants to define it differently, I don’t have a problem with that as long as the definition is clear.

The reason, as Nick Stokes points out, is that these emission pathways are essentially scenarios. We can consider various different scenarios and the impact of each scenario. This can then be used to inform policy making. It’s of course true that not each future emission pathway is equally likely, but we’re not going to follow one by chance alone; we can influence what emission pathway we actually follow. At any instant in time, we can estimate how much we’ve already emitted, our current emissions, and (based on the different scenarios) if we should be doing something to influence future emissions. It may be extremely difficult to follow some future pathways, but that doesn’t mean that we can’t try to do so (unless it becomes actually impossible, that is).

Also, the chance of following a particular pathway probably changes with time. It’s clearly becoming more and more difficult to follow a low emission pathway, given what we’ve already emitted. It may also be getting more and more unlikely that we’ll follow a high emission pathway, given our current understanding. That, however, doesn’t mean we should simply leave not doing so to chance. Of course, understanding different emission pathways, and the potential impacts of the different pathways, is an important part of decision making, but ultimately we will determine what pathway we’ll actually follow. We’re extracting the fossil fuels and burning them. This isn’t happening by chance. 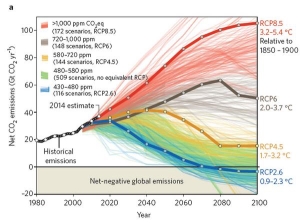 I guess one could argue that some emission pathways are virtually impossible and should, therefore, be ignored. However, maybe those who think that RCP8.5 is one such pathway, and that describing it as business as usual is wrong, should ponder the figure on the left. It certainly seems like business as usual at the moment. Also, if such a pathway is now virtually impossible, then it should be pretty straightforward to simply avoid following it, especially if doing so does presents risks that we might want to avoid.

179 Responses to RCPs as scenarios