There’s a new paper, discussing climate sensitivity, by Marvel, Schmidt, Miller & Nazarenko called Implications for climate sensitivity from the response to individual forcings. Before I discuss the paper, I should really advertise the lead author’s blog, arguably one of the best around. The idea behind the paper is to consider the efficacy (in a sense, the strength) of the different forcings. It seems to be an expanded version of what is done here and also seems related to what Isaac Held discusses in this post. 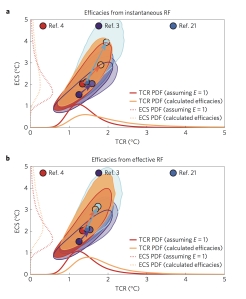 What Marvel et al. (2015) do is determine the efficacy for each forcing using the GISS-E2-R GCM. Once they determined the efficacy for each forcing, they then adjust the climate sensitivity estimates from studies that focused on recent observations (such as Otto et al. 2013; Lewis & Curry 2014; Shindell 2014). The results are shown in the figure on the right, where the upper panel is for instantaneous radiative forcing, and the bottom is for effective radiative forcing. The ECS is on the y-axis, and the TCR is on the x-axis. Including the forcing efficacies increases both the TCR and ECS estimates, making these observationally-based estimates more consistent with paleo-climatological estimates, and estimates from climate models.

Although this is only a single paper, my understanding is that it is generally accepted that the spatial distribution of the forcings, and the resulting warming, means that (as Marvel et al. say)

Climate sensitivities estimated from recent observations will therefore be biased low in comparison with CO2-only simulations owing to an accident of history:

when the efficacies of the forcings in the recent historical record are properly taken into account, estimates of TCR and ECS must be revised upwards.