I realise Michael Tobis is planning a follow-up to his post, but I thought would quickly pen this post about temperature targets, for example the Paris target of

keeping the increase in global average temperature to well below 2°C above pre-industrial levels [and] to aim to limit the increase to 1.5°C.

Many people argue that such target are purely political. Of course, a decision to try and achieve some goal will always be political, but that doesn’t mean that one can’t find some kind of justification for that choice of target. 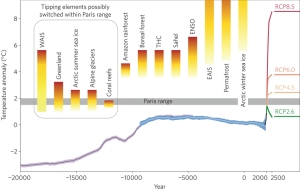 On that note, I recently came across a paper by Hans Joachim Schellnhuber, Stefan Rahmstorf and Ricarda Winkelmann called Why the right climate target was agreed in Paris. It includes the figure on the right which shows the surface temperature through the Holocene, the instrumental record, and future projections. The grey band is the Paris range, and the colored bars show various tipping points (defined as major subsystems of the climate being destabilised).

What this shows is that if we exceed the Paris target, then coral reefs will almost certainly pass a tipping point, and Arctic summer sea ice, Alpine glaciers, the West Antarctic Ice Sheet, and Greenland may also be destabilised. Other tipping points will probably only be triggered if we fail to keep warming below 4oC, but that is roughly where we’re heading with current commitments.

So, even though deciding on a target is clearly a political decision, there can still be justifications for choosing certain targets. The Paris target will at least give us a chance of not destabilising a major climate subsystem. Something to bear in mind, though, is that the carbon budgets associated with these temperature targets only give us a 66% (or, sometimes, 50%) chance of achieving this target. Even if we do reduce emissions in line with the Paris target, we may still not achieve the target. Similarly, our current commitments are in line with keeping warming below about 3.5oC, but even if we do follow this pathway we may still not keep warming below 3.5oC. One might argue that we should really be doing more, rather than less. Given this, maybe one way to frame proposals for a Red Team exercise is to insist that those who support this, acknowledge that delaying action could significantly increase the chance of passing a number of these tipping points.

Anyway, to finish this post I’ll simply highlight that there is another paper suggesting that observationally based climate sensitivity estimates are biased low. I’ve also added a video below, by Stefan Rahmstorf, that discusses the figure I’ve put in this post.